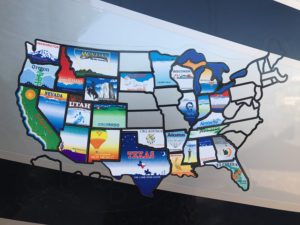 The following public, private campgrounds, RV parks, and boondocking/wild (free) camping locations have been visited by Pau Hana Travels since 2013 in the United States and Canada.  We will try and review each campground to the best of our ability and memory.  Please bear with us as we have quite a bit of backlogging and remembering to do to give you the most information on each site.  Please remember this is the personal opinion of Pau Hana Travels at the time of our visit. Places may have changed over the years or seasons. We will try to give as much detail as possible as to when we visited and what equipment we were in during our stay. We hope this will help you decide if its a place to call home for a night or 2. Reviewed campgrounds are highlighted in orange. Just click the link to read our review.