We are not your typical full-time RVers (we like to say we are part-time fulltimers) as we still own a “sticks and bricks” back home in Washington State. We spend typically 6-8 month out of the year on the road so we want to have all the creature comforts of home while away.  Our Fleetwood Discovery 37R gives us just that.

The Disco is our 4th rig together and Stacey’s 8th from over 15 years of vehicle camping experience. There are many reasons as to why we have gone through 4 rigs in such a short time but it basically boils down to finding what we needed.  Our first rig together was a 27ft pull behind and reasoning to trade it in was simply its size.  Our next adventure rig was our Carbon toy hauler which we owned for over 2 years and took all the way to the Florida panhandle and back in 6 weeks time!  Then in early 2016 after living in our toy hauler full time while we built our home back in Washington we decided it was time to move into something with a more residential feel.  This brought us to the forward living room fifth wheel in the Forest River Cardinal. However, we had a carrying capacity issue as the fifth wheel was built to only hold less than 1300lbs of stuff.  We wanted to add solar panels along with a generator and with these add-ons our carrying capacity was over.  So sadly a few months later we traded in the Cardinal for our Disco.

The Disco has been our best rig to date.  She’s a perfect size for two people in full-time conditions.   She is also a perfect length to get into most State and National Parks.  Any longer and that would be a huge hassle.  We also love the tank capacities which allow us to stay out on the road longer.  We have done several modifications to her since owning her including adding 2000 watts of solar, replacing the AGM batteries with Lithium, swapping out the uncomfortable “L” shaped couch with a LaZBoy sofa couch and a several other electronical upgrades to make life on the road more enjoyable. Most of these upgrades have been filmed and you can find on our YouTube Channel.

Our former modes of camping fun

We owned the Cardinal for only a few months but took her all over Washington, Idaho and Montana in the Spring and Summer of 2016. 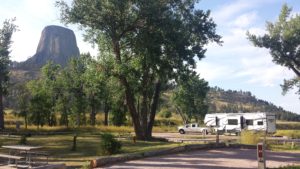 We owned the Carbon for 2 years and took her all over the United States in the Summer of 2014 when we went to the Florida Panhandle and back in her.  She was a great toyhauler and really opened our eyes on living the lifestyle. 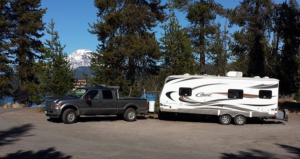 Our Cougar brought us the love of camping as a couple.  We took him to the Oregon Coast in 2013 as well as to the ski slopes over New Years in the dead of winter.